The looks and attitude of a Grand Prix horse!

Number Two is a modern built stallion with lots of charisma and by looks reminds us a lot of his sire Just Wimphof and dam's sire Ferro. The stallion moves with a very strong and stable hind leg and has a very good back/loin. We will give this stallion enough time for development and certainly expect that he has a lot of talent for advanced dressage work. Number Two would be an ideal partner choice to a mare whose hind quarters  and back/loin could be improved.

Number Two was born as an embryo foal out of top mare Part Two, dam to licensed stallion Ferdeaux and to another 4 Prix St. Georges horses. Together with breeders, Gerrit and Anne Marie van Esterik, we have agreed on the stallion choice and further handeling of the insemination for their mare. From the moment a foal was born you could see that it is a special one! Gerrit and Anne Marie van Esterik raised him up and as a 2.5-year-old stallion he had been trained under the guidance of Renate and Hidde Scheerman. The stallion has been developing great towards KWPN pre-selection and came at his best at stallion performance tests in Ermelo. The stallion showed a very strong performance: correct basis gaits with remarkable canter with praisful note from the jury panel that makes him the highlight for our new breeding season.

Lineage:
Number Two is a son out of the first crop of the De Niro-son Just Wimphof. Just Wimphof has successfully participated in the World Breeding Dressage Championships for Young Horses and recently made his successful debut at ZZ-Licht level. As top supplier of the stallion show he showed a good collection out of his very first crop.
The dam of Number Two is Part Two, a ster preferent prestatie mare by the preferent top progenitor Ferro. Part Two is also the dam of KWPN-stallion Ferdaux (s.Bordeaux) that is successfully competing in the Prix St. Georges. In addition, Part Two produced multiple sport horses, including the Small Tour-horses U-Two (s.Goodtimes) and Winne Two (s.Goodtimes) as well as Double Trouble-Two (s.Jazz) that is active in the international Intermediaire-I. The damline of Number Two continues with the ster prestatie mare Fabiola. This Zonneglans-daughter is the dam of the Big Tour-horse Tiptop Mateo (s.Metall), Special D offspring Zxen that competes at international Prix St. Georges-level and a Z2-horse by Equador. Greatgranddam of Number Two is the ster mare Wenda, a daughter of the Lorenz-son Rubinstein.

Performance test report:
Number Two is an honest and an easy to work with stallion with a good attitude. The stallion has great willingness to work and has very good trainability. The walk is pure, good in scope and very active, however he could show more freedom of the shoulder. The trot is powerful with good tact and good use of the hind leg. The canter is very powerful and shows good carriage and scope. Number Two has a lot to a great deal of talent and gives his rider a good to very good feeling.

Stable behaviour:
Honest, reliable stallion, easy to handle and calm in the stable.

Breeding & pairing recommendation:
Number Two can improve the rideability and attitude and add power and impulsion to dressage breeding.

This report contains the data and knowledge at the time of approval (May 2021). Some information in the report may be revised at a later date based on new knowledge or data. 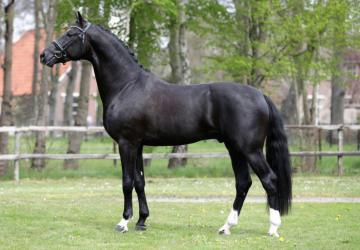 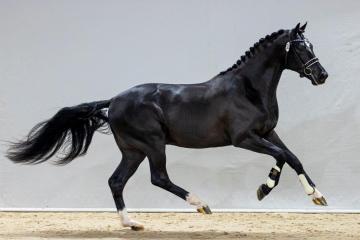 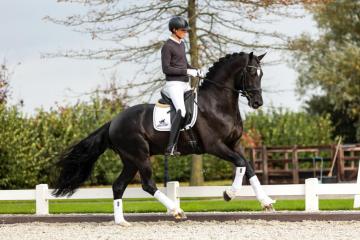 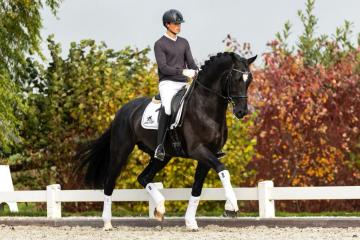 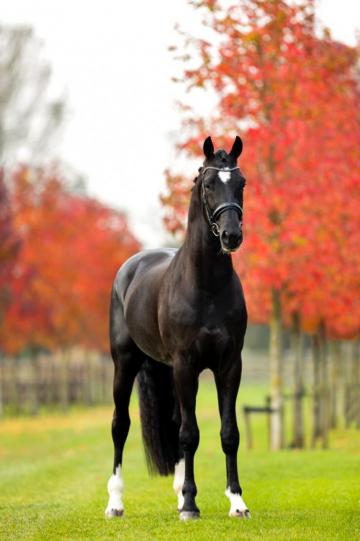