In 2019, the KWPN licensed Stakkatol as an approved stallion.

Stakkatol consistently breeds high-performance show jumpers. As of 2012, Stakkatol had sired 126 registered offspring with 98 in sport, of which 46 have reached 1.40m to 1.60m.

Stakkatol himself jumped successfully at 1.40m level under Bastiaan Freese and had unlimited scope. Unfortunately, the stallion had to be withdrawn from sport due to an injury. The saying "what a stallion has in him, he can also pass on" comes true for Stakkatol because many of his children inherit a wealth of talent.

Stalognia, mother of Kannatol sold on PSI for the record price of 1.7 million euros.

Pedigree
Stakkatol is a gray son of the Hanoverian stallion Stakkato from Caroll, a 1.40m jumping daughter of Capitol I. Grandmother Lolita is a daughter of the Ladykiller xx grandson Liguster from a Roman mother.

Great-grandmother Goldika is a daughter of Faenrich from an English thoroughbred mare. 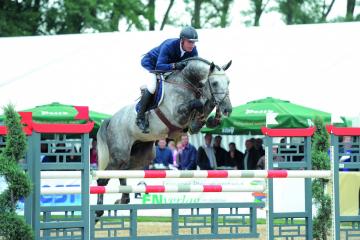