The sensation from Germany!

Due to an injury, the owners of About You RS2 have decided not to cover the stallion anymore. The welfare of the horse is of course paramount.

We are very pleased to offer the young talent About You RS2. In addition to his talent in competition, he also comes from a strong dam line. His granddam Priscilla produced the Grand Prix horses Farinelli and Mein Marchenprinz, as well as his dam, Evita, who now can compete at Z2.

Message Horses 15 August 2020
On Saturday evening, RS2 Dressage bought the four-year-old Westphalian-bred stallion About You (AC / DC x Estobar) at the auction from breeder Stephan Borgmann. There was already sensation in the air as soon as the videos of the stallion appeared on the Internet and it was settled within fifteen minutes. About You will go to the Netherlands for 1.65 million euros. Horses.nl discovered that RS2 Dressage was the new owner. "It is an exceptionally good horse" says Robin van Lierop.

The brown stallion immediately caused goosebumps among the auction public. With a lot of impulsion, About You danced through the track under Portuguese rider Ana Teresa Matos Pires, who trained him. There was interest in the stallion from all over the world and within five minutes the price of the opening bid of 10,000 euros had already risen to over one million euros. Ultimately, the hammer fell at 1.65 million.

Van Lierop: "An exceptionally good horse"
Robin van Lierop: “It was a kind of double day for us. We were with a few mares at the National Mare Inspection in Ermelo, but in the meantime also had to keep an eye on the auction. In the end it turned out to be a lot of money, but it is also an exceptionally good horse, and his bloodline made him very interesting for breeding. ”

“About You is a very special horse. With three very good gaits, but especially the ride is very special. Really a very complete horse. He has been approved in Southern Germany, but of course we would also like to introduce him to the Stallion Show in the Netherlands ”, says Van Lierop.

Message Horses July 30, 2020
The non-approved About You (AC / DC x Estobar NRW) under Ana Teresa Matos Piresleft behind the entire field of approved stallions at the Westfalen-Woche in Münster-Handorf . About You received only one mark under 9 (an 8.5 for the walk) and won the championship for three-year-old stallions with an average of 9.05. About You defeated among others Bon Vivaldi (Benicio x Vivaldi), approved in Westphalia, who scored an 8.7 average and Franz Joseph Junior (Franziskus x Rock Forever I), who received an 8.5 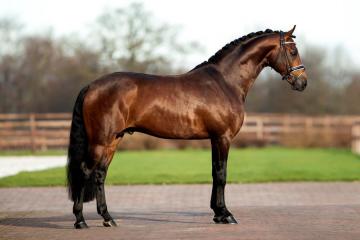 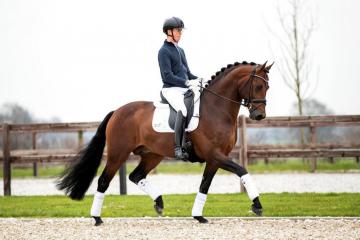 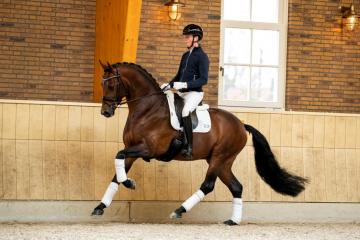 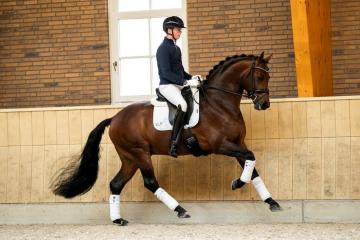