Sire of many good dressage horses, approved stallions, and many national top mares.

The daughters of Balzflug also do very well in breeding.

Pedigree:
Balzflug is the name of the Trakehner stallion imported from Germany who stood at stud in Germany, Belgium, and the Netherlands. His sire Habicht was selected General Champion at the Trakehner stallion selection in Neumünster in 1970 and can be regarded as one of the most influential sires within this studbook. Habicht has 25% Anglo-Arab blood flowing through his veins through his father Burnes X.

On his dam's side, Balzflug can boast of beautiful German bloodlines. His dam Balzjagd is a State Premium Mare by Insterfeuer out of the thoroughbred stallion Seminole II XX. In addition to Balzflug, she also produced Balzruf by Habicht, who was Champion of the Dressage Horses in Warendorf, and the dressage horse Belschamel, who was sold for DM €170.000,- in Germany (P.S.I Auction). At the 1992 National Championship for Military Horses, a 3rd brother from the combination Habicht / Balzjagd managed to conquer a 3rd place in the six-year-old Military Horses.
The two ladies in the family are no less than her brothers. During the Performance Test in 1990, the first named Balz was too strong for the competition as a 3-year-old and went home with the highest number of points. The other daughter Ballentine was in 1994 Champion of the TCN inspection in Wenum Wiesel (Netherlands).

Own achievements:
At his approval in Germany in 1988, Balzflug was already considered one of the top horses of the approval. In 1989 Balzflug completed the Performance Test in Warendorf where he finished in second place with 129.85 points.
Balzflug was immediately accepted for Belgian breeding, where he was immediately offered 170 mares in the first year, with nines for gallop and willingness to work and eights for trot and 'Rittigkeit'. 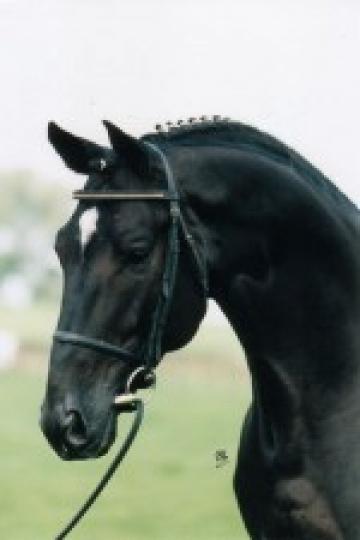