How did Bohemian van Catharine Dufour advertise for our stallion Bordeaux. With a 4th place at the Olympic Games in Tokyo and a Silver and Bronze Medal at the European Championships. in Hagen they are among the best combinations in the world. But also the international Grand Prix horses Rose of Bavaria, Bluetooth OLD, Bon Romantic, Bonheur la Vie and Fame bring Bordeaux to the top of the WBFSH Sire Ranking (17th pl.) and No. 1 on Hors Telex B-Ranking (descendants max. 12 years). Bordeaux is also distinctive in its breeding in the Netherlands with, among others, Performance Champion 2021 Merlot VDL (ds. Florencio), IBOP topper Laytown G (ds. Uptown) and World Championship topper Johnny Depp (ds. Jazz).

2021
Bordeaux's oldest offspring will turn 10 this year, and 11 of these descendants are already competing in international dressage. The various rankings, especially for young breeding stallions, show how much quality talent Bordeaux passes on to his offspring. Bordeaux is the new leader of the HorseTelex dynamic ranking, which is recalculated daily. He also has an IPV (International Progency Value) of 1,012.73. KWPN Stallion Champion in 2009,  Bordeaux has made the largest jump of any sire in the WBFSH-Sire Ranking 2020 and is now in 29th place. Bordeaux is fully available for the 2021 season.

2020
Bordeaux offspring had another fantastic year. At the World Cup competition in Aarhus, top talent Bohemian under the Danish Cathrine Dufour and Freestyle to Music won with a score of 88,200%, beating the German top riders such as Isabell Werth and Jessica von Bredow-Wernd. At the British Dressage Championships, Laura Tomlinson with Rose of Bavaria led the rankings, and she hopes to compete at the Olympic Games in Tokyo.

At the end of 2019 we bought back Paul Schockemöhle's share, making Bordeaux entirely our property and fully available for Dutch breeding. Now that all Bordeaux semen is at our breeding station, we can offer it daily. During the 2020 breeding season, many breeders had confidence in Bordeaux and we achieved good pregnancy scores with him.

In 2019, five Bordeaux sons were shown at the KWPN Stallion selections in Den Bosch.  All five were selected for the KWPN Performance test:

Pedigree
Bordeaux: a perfect pedigree: United x Gribaldi x Donnerhall x Rousseau x Angelo xx. Angelo xx daughter Adone is also the mother of Rembrandt. Bordeaux descends from the famous de Baey Olympian line, from which come Rembrandt, Amon, Ahlerich and Rubinstein. Rembrandt won four gold medals with Nicole Uphoff in 1988 and 1992 at the Olympic Games in Seoul/KOR and Barcelona/ESP. Ahlerich won individual and team gold with the riding master Dr. Reiner Klimke at the 1984 Olympic Games in Los Angeles/USA, the 1982 World Championships in Lausanne/SUI and the 1985 European Championships in Copenhagen/DEN. Ridden by Annemarie Sanders-Keyzer/NED, Amon took part in the Olympic Games three times, won the Dutch Championships seven times and was considered the most successful dressage horse in the Netherlands at the time. Rubinstein was part of the Olympic team with Martina Hannöver and is well-known for the good rideability he passes on to his offspring.

Over 25 of Bordeaux’ sons have been licensed, including Bordeaux’ Barolo, victorious up to Inter I level, and Buckingham, winner of his stallion performance test.

Bordeaux is a model student: Champion Stallion at the KWPN licensing in 's-Hertogenbosch/NED and stallion performance test winner in Ermelo/NED in 2009, highly-placed finalist at the Pavo Cup Final (comparable to the German Championships) in Ermelo/NED with Eva Möller in 2010, fourth at the World Championships for six-year old dressage horses in Verden in 2012, victory in the annual final of the stallion competition series in 's-Hertogenbosch/NED in 2013, first successes at advanced level dressage competitions in 2014, first Grand-Prix placings in 2015, placed at the Louisdor Prize Final in Frankfurt in 2016, participated, with Isabell Freese/NOR, in the European Championships in Gothenburg/SWE in 2017 and further international Grand Prix successes in Hagen and Hamburg in 2018.

With our stallions Krack C and TCN Partout, his sire United has two internationally successful Grand-Prix stallions in his pedigree, both ridden by Anky van Grunsven/NED. He completed his stallion performance test in Ermelo/NED with exceptional scores: 9.5's for trot, for canter and for his disposition as a dressage horse. Ridden by Edward Gal/NED, he was placed in Small Tour competitions. With Brooklyn, TC Athene, Aquamarijn and MDH Avanti, he has produced further highly successful Grand-Prix horses.

The dam’s sire our stallion Gribaldi was Trakehner Champion Stallion, victorious at Grand-Prix level with Edward Gal/NED, Trakehner Stallion of the Year in 2008, was honoured with the top predicate “preferent” in the Netherlands and led the WBFSH world ranking of the best dressage sires in the world in 2014, thanks to his descendants Totilas, Girasol, Sisther de Jeu, Peter Pan and Painted Black .

The dressage hero Donnerhall appears in the third generation.

Bordeaux currently has an index 154 with a liability of 88% 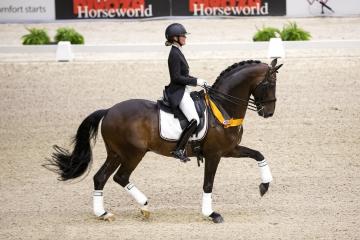 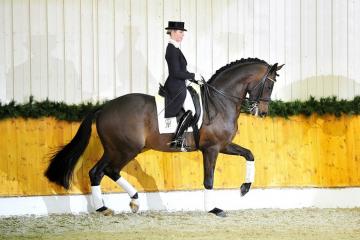 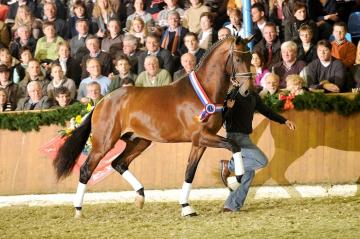 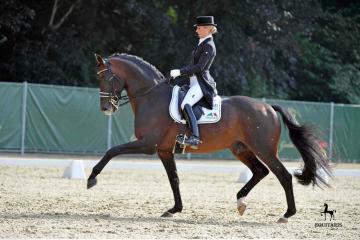 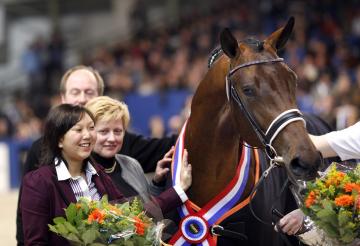