Satisfies the X-ray requirements for the KWPN

Schwarzgold is a modern black Trakehner stallion, from the best lines of Trakehnerstoeterij Fam. Poll from Hörem. He is able to forgive "blood" because the proportion of whole blood in his veins is very large through his father Imperio and mother's father Consul. Via Seeadler he goes back completely on a Thoroughbred line. This makes him very interesting for modern dressage horse breeding.

He himself was a premium stallion in 2011 at the Trakehner Stallion Show in Neumuenster and then qualified in 2012, 2013, 2104 and 2015 for the Bundeschampionat in Warendorf. His father Imperio already has a fantastic track record: Reserve Champion at the Trakehner Stallion Show, winner Trakehner-Bundesturnier. Reserve World Champion with the young dressage horses in Verden and winner of the Bundeschampionat with Anna-Sophie Fiebelkorn, Imperio is now successfully released in the Grand Prix by Hubertus Schmidt and was reserve for the Olympic Games in Rio de Janeiro 2016.

His dam Seeconda is a Trakehner Elite mare and is also the dam of Sir Arthur v. Buddenbrock who was already successful at S-level in Germany at the age of 7. She is also the mother of the full sisters Pr.St. Scarlett O`Hara and Pr.St. Skyline of the Trakehner stallion Connery.

At the Trakehner Stallion Show in 2015, Schwarzgold`s son Perpignan Noir was proclaimed Sieger stallion and sold to Austria for a whopping euro 340,000.

In 2016, Schwarzgold supplied both the Champion and the Reserve Champion for the 3-year-old mares!

4x qualified for the Bundeschampionat 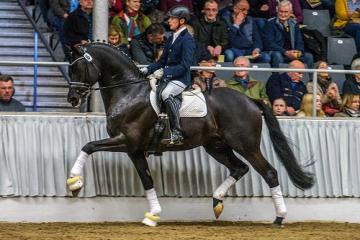 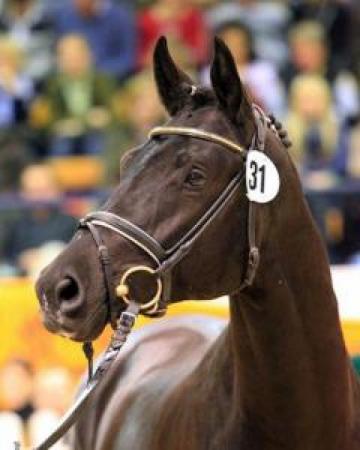 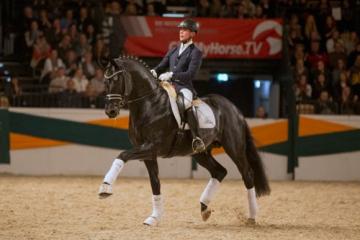